Discover the science base for information 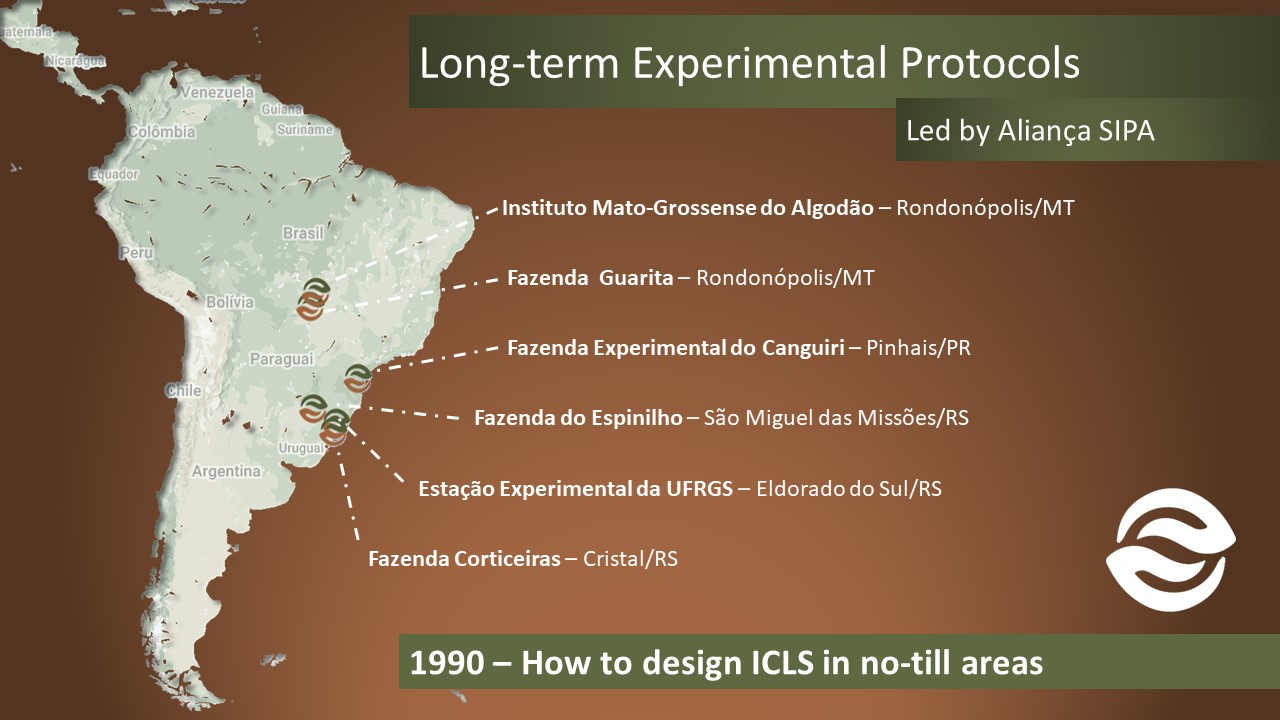 The basis for the generation of scientific knowledge disseminated by Aliança SIPA is entirely based on seven experiments, which encompass different producing regions of the Brazilian tropics and subtropics. The experiments are all long-term and based on Integrated crop-livestock systems, generating information requested and safe to be applied. 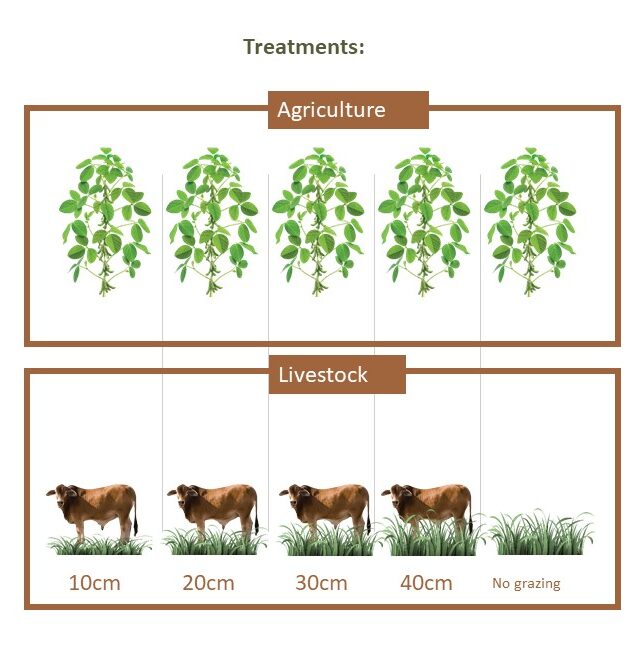 The experiment has been conducted in direct sowing since 2001, in an area belonging to the Espinilho Farm (São Miguel das Missões). The soil is classified as a clayey Red Latosol, deep and well-drained. The system compares the introduction of rotating winter pastures with soybean crops with areas without integration. The total experient area is approximately 22 hectares.

The treatments of different heights of pasture management: 10, 20, 30, and 40 cm and a treatment without grazing. Steers, aged around 12 months, are used in continuous grazing from the first half of July, extending until the first half of November, when soybean is cultivated until April / May. The main hypothesis refers on the impact of grazing intensities on animal and soy production in succession. 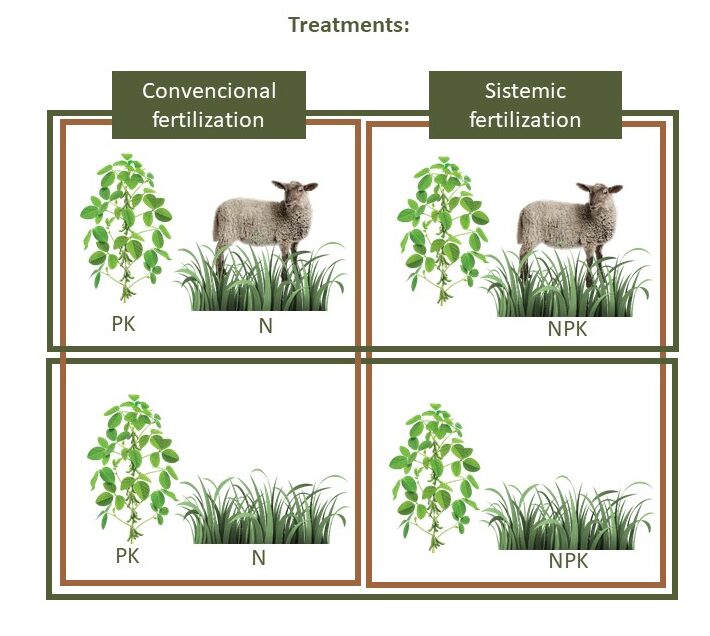 The experiment has been conducted under no-tillage  since 2003 at the UFRGS Experimental Agronomic  Station (Eldorado do Sul / RS) in Loamy Acrisol with a sandy-loam texture, with slightly wavy relief and a total area of ​​4.8 ha. In winter, the experimental units receive annual  ryegrass, managed with two grazing methods: continuous and rotational, and two grazing intensities: 2.5 and 5.0 times the potential consumption of finishing lambs.

The animals’ stocking rate adjustment is done at each end of the rotational grazing cycle, and the variable stocking is readjusted by forecasting the production of the pasture in the grazing cycle. In summer, the units are subdivided into two production systems: one with soybean monoculture and the other with annual soybean/corn rotation. In the year 2017, this experiment underwent modification. Today its main objective is to evaluate the impact of fertilizing systems (only in winter, ryegrass, or in summer, in soybeans), in the attributes of soil, animal production of sheep, and grains of soy.

The conduction of the experiment follows similarly, using sheep in grazing with variable stocking rate, aiming to maintain a 15 cm  height of ryegrass pasture. The hypothesis of the current experiment relies on the effect of phosphate and potassium fertilization on agricultural and livestock production and the main attributes of the soil. 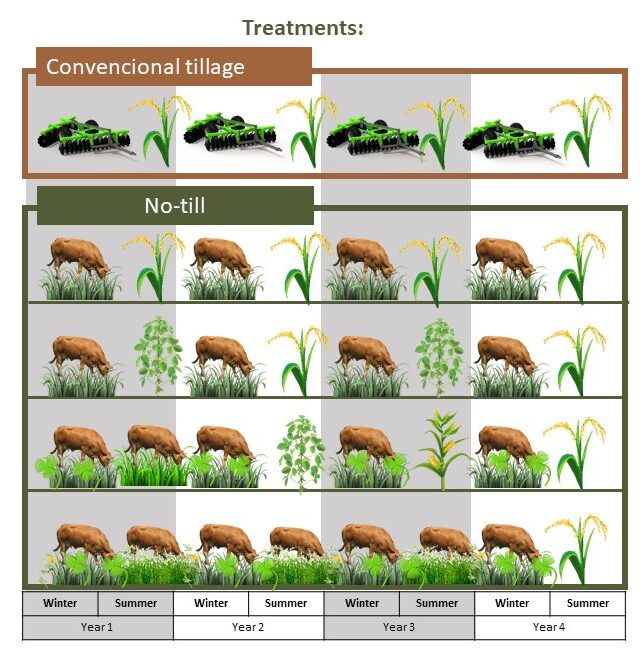 The experiment has been conducted since 2013 at Fazenda Corticeiras (municipality of Cristal / RS), in Albaqualf soil, with flat relief and an area of ​​18 ha under no-tillage in four of the five systems. The investigated systems represent different scenarios of rice production in lowlands in the southern half of RS. The grazing cycle uses beef steers in continuous grazing. As of the winter of 2017, the systems received new adaptations, mainly involving the timing of fertilization. To evaluate the efficiency of using nutrients from the different systems, only the reference production system, with rice production in monoculture and intense soil revolving, will receive fertilization in the summer, with the other systems receiving all fertilization in the winter period, characterizing systemic fertilization. The door hypothesis is about the impact of pasture introduced on agricultural rotations and the spatial (intensity) and temporal (duration) diversity of these rotations. 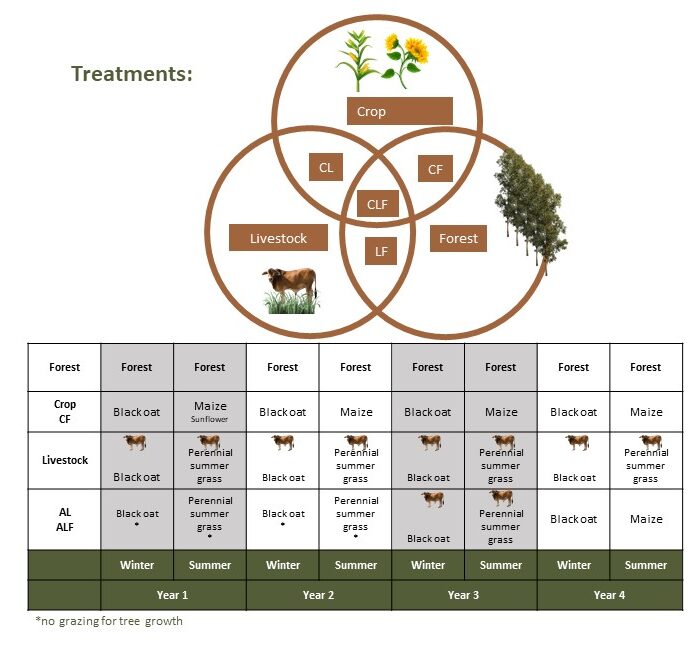 The 32 hectare area of the NITA experimental protocol is located at UFPR’s Experimental Canguiri Farm, which is part of the Iraí Environmental Protection Area, in the municipality of Pinhais-PR. Since 2012, the productive aspects and ecological relationships of the seven possible arrangements of production systems made up of agricultural, animal and forestry components have been studied. Strategies that make agricultural production viable without the use of synthetic pesticides are also studied, such as no-tillage on the plant. 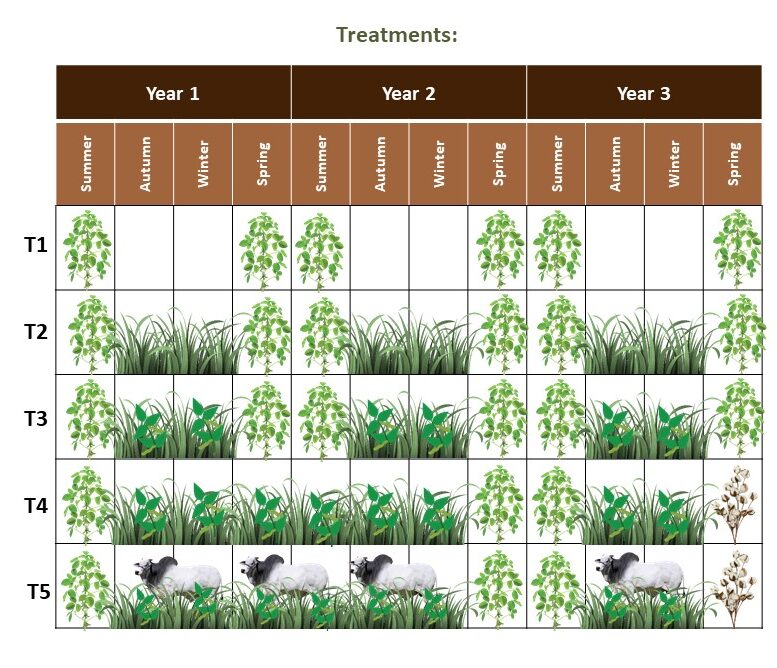 The present experiment has been installed, since 2017, in an experimental area of ​​the Mato Grosso do Sul Institute (IMA), in the city of Rondonópolis – MT, in a Red Argisol.

The experiment consists of combinations of crop management systems with increasing levels of plant diversity (Functional Diversity). The soybean crop is grown in the harvest (sometimes rotated with corn). The pasture is inserted in the second harvest, except for the fallow system, with single pasture for eight months, intercropped pasture (with species from 4 families) intercropped pasture (with species from 4 families) for 20 months and a system with greater diversity with the introduction of animals for grazing.

The experiment objective is to have information for adequate management of sandy soils cultivated with soybean in Mato Grosso.

The present experiment has been installed, since 2017, in an experimental area of ​​the Mato Grosso Institute of Cotton (IMA), in the city of Rondonópolis-MT, in a Red Argisol. The experiment consists of combinations of crop management systems with increasing levels of residues addition and plant diversity in the pasture phase, with a focus on adding organic matter in sufficient quantity and quality to increase the population and diversity of soil microorganisms, with repercussions on soil quality and  sustainability of the cotton production system in sandy soils. 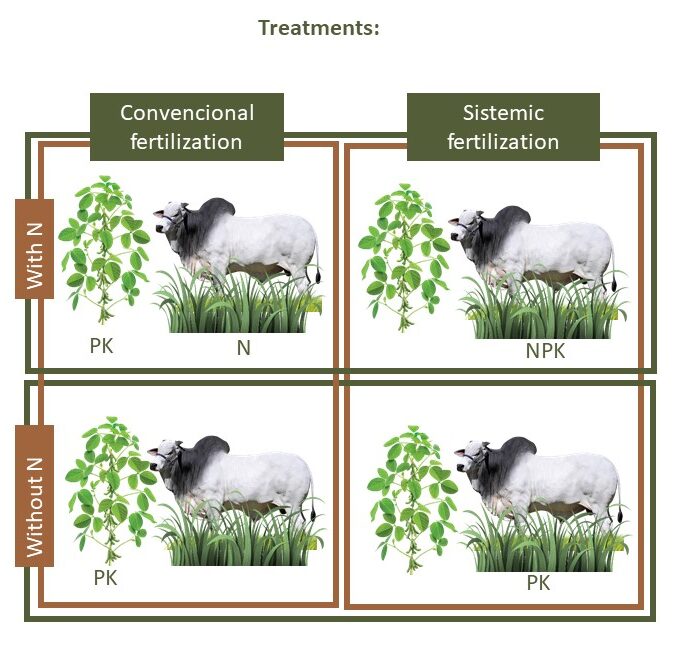 The Experiment has been conducted since 2019 at Fazenda Guarita (Rondonópolis – MT), in an area of ​​22 ha in a dystrophic Red Latosol.

The systems investigate how the timing of fertilization (P and K) and nitrogen fertilization in the pasture of an ICLS can cause effects on soil-plant-animal-atmosphere relationships.

The anticipation of fertilization in the off-season promotes improvements in the quality and production of the pasture, enhancing animal production without affecting soybean productivity.